This week, I’ve taught several “Business Impression” workshops. In these sessions we’ve discussed everything from dress and appearance to handshake rules. I’d always thought that the clothing discussions would create the most buzz and controversy, but it turns out, there are a LOT of different opinions (and pet peeves) on the subject of handshakes. Therefore, I decided to re-run this blog post from 2012. I hope it helps everyone, but especially clarifies the concerns of those who attended my workshops this week!

Your handshake helps create a first impression to everyone to whom you offer it.

Within the mainstream U.S. business culture, the rules for handshakes are pretty straightforward and standard, but people often break them unknowingly. Additionally, before taking these rules overseas or across borders, keep in mind that handshake “rules” vary across cultures. Therefore, do your homework before interacting with those from other places in the world

To avoid appearing rude, wimpy, aggressive, or just plain gross, here are some tips for creating a positive and assertive first impression.

1. Know when to shake hands

2. Shake for no more than three “pumps”

A business handshake shouldn’t last more than two to three pumps or approximately three seconds. If you hold on too long, or pump too many times as if you’re trying to bring up water from a well, you can make people uncomfortable or appear anxious and unsure of yourself.

3. Shake from your elbow, not your shoulder

A handshake should be assertive, but not jarring to the other person. If you shake from your shoulder, using your entire arm, you can knock people off balance (or dislocate their arm). Shake from your elbow in a smooth, up and down motion. 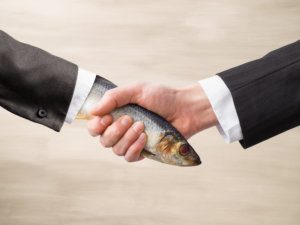 A handshake that is limp or too soft can convey weakness to the other party and puts you in a “one down” position. Additionally, if your hands tend to sweat, or you’ve just come from the gym, discreetly pat your hands on your slacks before extending your hand. Or if you can, go wash and dry your hands before approaching people.

5. Don’t use a “bone crusher” handshake

Spend a lot of time at the gym and don’t know your own strength? A good test of grip is to only use the force required to grab and turn an UNLOCKED door handle.

6. Don’t use the “little lady” handshake EVEN IF you’re a man shaking hands with a woman

Forget what your parents taught you about a “polite” handshake; this is 2015, not 1900. Unless you’re shaking hands with someone’s great-great-grandma, or drinking mint juleps on the veranda at a debutante ball, grasp hands “web to web” using your entire hand.

7. Shake with one hand, not two

Unless you’re a politician who is perceived as standoffish, but is trying to “appear” more friendly and warm — don’t offer a two-handed handshake. Use only your right hand. If you use two hands, you may convey to the other party that you’re trying too hard, or you might make them uncomfortable by being too personal.

Do you have any other handshake tips you’d add to this list? Let me know!