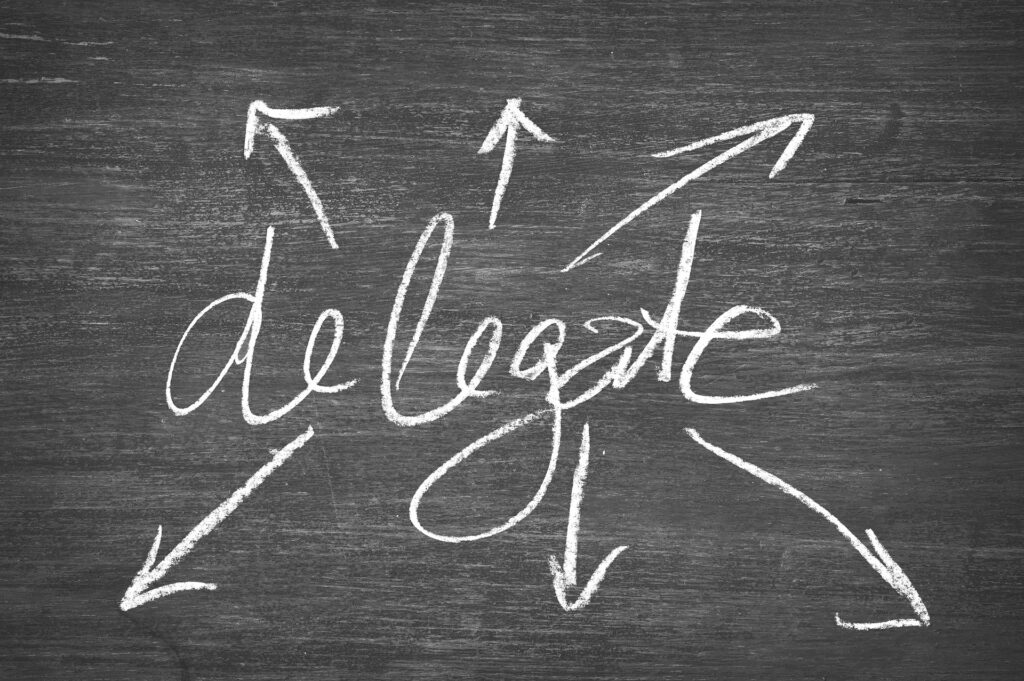 Marcel Schwantes  posted a great story in INC., sharing some of Warren Buffet’s top leadership advice. One of the key points was:

“Learn to delegate your authority”

So, I thought I’d share some of my best delegation advice from more than 20 years of helping leaders and business owners avoid drowning in tasks and responsibilities that they should really be delegating to others.  Whether it’s delegating to someone who can do that task better than you or to someone who needs to grow by learning new responsibilities, to become a great leader, you have to move from being a “doer” to “leader of those who do.”

Step 1: Identify Tasks You Can Delegate

The first step to delegating effectively is knowing what you should and shouldn’t delegate. Ask yourself, “What short and long-term tasks or projects can I take off my plate?”, “What things are others capable of doing?”, and “What things should others become capable of doing?” A big mistake many people make is only delegating easy things or things that nobody really wants to do. You need to look at delegation as an opportunity to not only get things off your to-do-list, but also as an opportunity for your staff to develop new skills. When they do, they’ll not only be more valuable to you, but they’ll also be more dedicated to you and your business and feel more empowered to do what’s needed to help the business succeed.

However, there are some tasks that shouldn’t be delegated such as hiring, firing, morale problems, and other things where a leader needs to set the tone and example.

Leaders often tell me, “I don’t delegate because the last time I did, the person didn’t do anything right and the outcome was not at all what I wanted.” My question to them is always, “What did you tell them about the outcome you expected?” When they’re asked to explain the specific outcome, with details, many people can’t. This is one of the main reasons delegation fails. If you can’t clearly explain the end-result you’re looking for, then how is a delegatee going to be able to achieve it? For example, what do you think would happen if you asked two different staff members to write up a step-by-step plan for hosting an event at your organization? My guess is each staff member might have very different ideas for the event. Although you shouldn’t dictate every step or detail of a delegated task, it’s critical that you paint a clear picture of the end result you seek and then let the delegatee figure out how to bring that picture to life.

Step 3: Choose the Right Person for the Task

Choosing the right person for the task doesn’t always mean choosing the most experienced person. However, delegating a task to a less-experienced person requires planning on your part. If you only delegate when you run out of time to do something yourself, you won’t have time to provide the proper training and guidance for someone taking on a new task. In addition to looking at those who could benefit or need to learn a new task, it never hurts to ask who might want to take on the delegated task. It’s always easier to delegate to someone who actually wants to do the task than to someone you have to convince to do it.

Step 4: Ensure the Delegatee has Everything Needed to be Successful

Whether it’s training, a proper budget, enough time to get the task done, or feedback along the way that keeps them on track, you need to provide everything possible to give the delegatee a fighting chance of success. Additionally, it’s critical to provide a safety net, especially when a giving someone a task for the first time. A safety net could be a mentor who has done the task before and is available for on-the-job-training and guidance. Pre-planned check-ins are also an important safety net. If someone is new at something, you don’t want to find out the day before the task deadline that they’ve gone off course. Having pre-planned check-ins, such as once a week or as they complete 25, 50, and 75 percent of a task will help ensure they’re progressing in the right direction and will give you a lot of peace of mind.

However, even when we do everything to help someone be successful, there are times when failures are going to occur. A critical safety net for any delegation is making it safe for people to fail. This means reassuring delegatees that you expect mistakes to occur and accepting those mistakes when they happen. It also means responding calmly when mistakes happen and focusing on what the delegatee learned and what they’ll do to avoid the mistake in the future.

At the end of any delegation experience, take the time to review the results from your perspective and from the delegatee’s. What went well and what could be improved next time? What challenges arose and how did the delegatee tackle them? Be sure to also get recommendations for the future, not only for how the task could be performed more effectively, but also any other ideas or innovations that arose during the course of the project.