Stop Beating a Dead Horse: 5 Reasons You Should Stop Using Cliches (and Idioms)

At the end of the day, the bottom line with communication is to create a win-win situation between you and your audience. In a nutshell, you want to communicate your message clearly.

Okay, how many clichés have you counted so far?

According to Dictionary.com, a cliché is, “A trite, stereotyped expression; a sentence or phrase, usually expressing a popular or common thought or idea that has lost originality, ingenuity, and impact by long overuse. The site defines idioms as, “Expressions whose meaning is not predictable from the usual meanings of its constituent elements,” and goes on to clarify that idioms are often culturally specific and don’t translate well into other languages.
Since I don’t want to turn this into an English lesson, I’ll stop here with the definitions. The bottom line is that clichés and idioms are best avoided. Here are 10 reasons why.

1. They’re worn out and boring.

As the dictionary entry above notes, words and phrases become clichés because they’ve been overused.

Clichés don’t translate well to other languages and they don’t cross generational lines well either. The phrase, “Salute smartly and carry on,” probably makes sense to veterans and those from the “traditionalist” generation– it loosely translates to “do what you’re told to do.” However, for younger people who haven’t served, the phrase probably has no meaning. Additionally, if you translated, “salute smartly,” into another language; the true meaning of the phrase would be lost.

3. You may be using them incorrectly anyway.

How many times have you heard someone say, “I nipped it in the butt”? The correct phrase is, “nipped in the BUD,” meaning, to stop something in its early development. The phrase relates to nipping buds from plants before they’ve had a chance to bloom, in order that the plant will produce even more flowers.

Other examples include “difficult road to hoe,” and “six and one and half dozen of the other.”

Rather than taking the time to express yourself clearly, you opt instead to toss in one, or a dozen, “borrowed” phrases.

5. They make you sound fake.

A boss who asks employees to “think outside the box,” or “give 110%,” and tells them he or she is available, “24/7,” just sounds like a phony. The same goes for everyone who overuses clichés- they become cliché.

I’ve given you some of my personal favorites. Here are a few business-specific cliches that drive me crazy.

-Take it to the next level 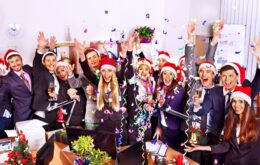