Six Simple Ways to Get People to Listen to You 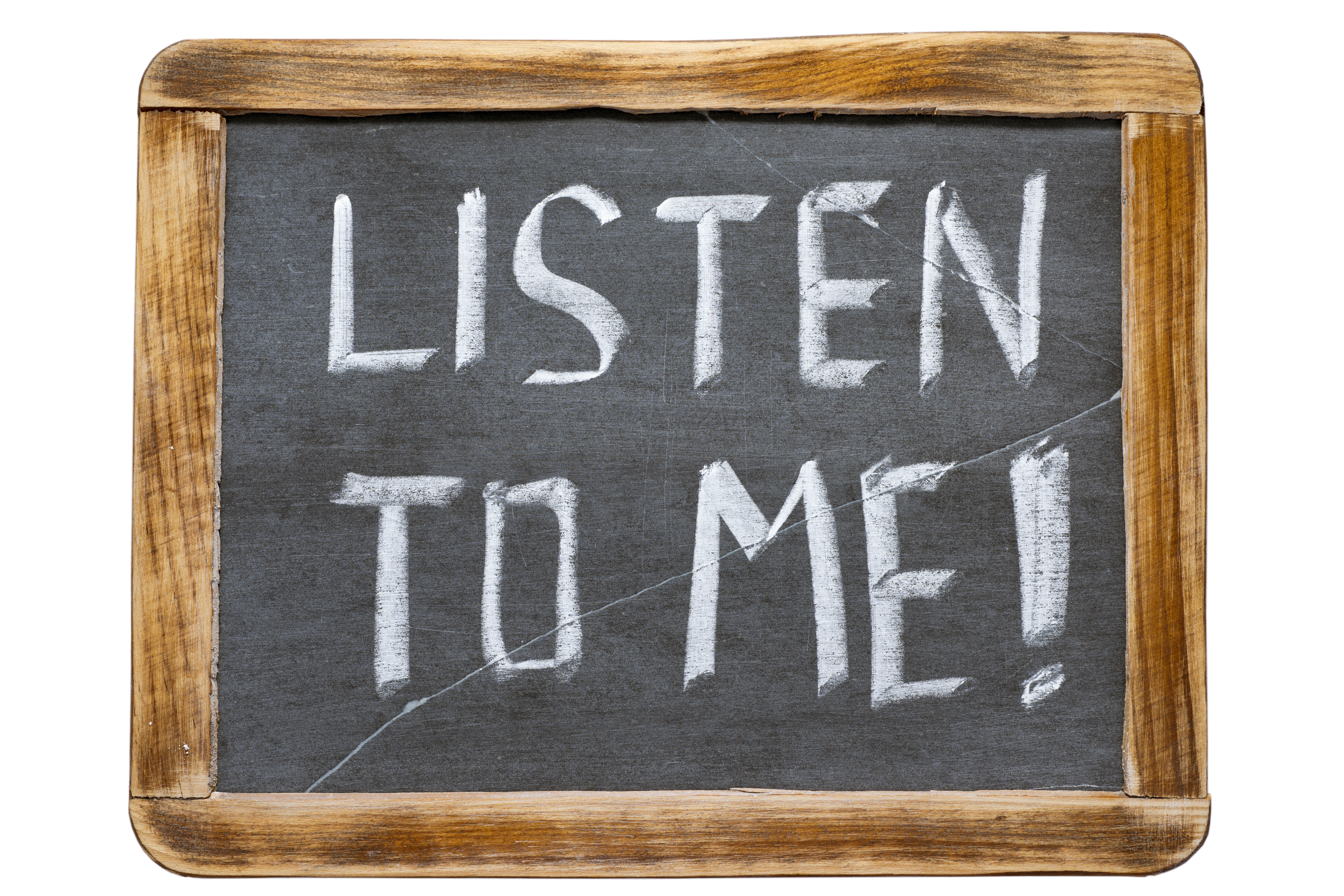 One day an old man was casually walking along a country lane with his dog and his mule. Suddenly a speeding truck careened around the corner, knocking the man, his mule, and his dog into the ditch. The old man decided to sue the driver of the truck, seeking to recoup the cost of the damages.

So the old man said, “Well, me and my dog and my mule were walking along the road and this truck came around the corner and knocked us into the ditch. The driver stopped, got out of his truck, saw my dog was badly injured, went back to his truck, got his rifle, and he shot it. Then he saw that my mule had broken his leg so he shot it. Then he said, ‘How are you?’ And I said, ‘I’m perfectly fine.'”

How may times have you felt like the old man in this story? You’re trying to tell someone something, but you just can’t get them to listen!

I’ve written many blog posts on the subject of listening, but I realized this past week, that ALL of them discuss how to BE a good listener. None of them talk about how to get others to listen to us when we’re trying to communicate something. Although you can’t make people listen to you if they don’t want to, making a few simple changes to how you communicate can increase the odds they’ll listen.

1. Ask if the person has time to talk with you before you begin talking.

Whenever I call someone on the phone and I want to share some information, I always say, “I want to talk with you about something, do you have 10 minutes you can spare for me?” By asking for his or her time, I increase the odds the person will listen because I’m giving them a choice. If they say “yes,” they’ve made a commitment to listen and most people will give me the 10 minutes. If they don’t have 10 minutes for me, they might offer me five. If they don’t want to talk with me at all, at least they’ve had the chance to get out of the conversation.

2. Get to the point quickly.

Although getting to the point quickly would have ruined the joke about the old man, his dog, and his mule, it would have made the interaction more effective. If the old man had imply started with, “Yes, I said I was fine because I was afraid he’d shoot me,” the conversation would have been a lot shorter and the attorney would have been a lot less frustrated with him. When we take forever to get to the point, people quickly lose interest and may get annoyed. If you’re going to tell a story or explain a situation, it’s best to plan what you’re going to say before you start.

Let’s face it, people are self centered. If you want them to listen to something, especially if it’s going to take awhile, they’re more likely to listen if they know, “What’s In It For Me?” For example, if you’re talking to employees about a new benefit program, don’t start with the information about filling out the forms, start with how the new program will benefit employees. If you’re trying to explain how to do a task to a family member, lead with, “I’m going to share the shortcuts I’ve learned so this will be a lot easier for you.”

4. Tell people what type of listening you want them to do.

Me: You wouldn’t BELIEVE what happened to me at work today! Meg was 2 hours late showing up for the workshop and then said nothing about why she was late. She just went on about her business as if nothing had happened.

LeRoy: Well, you should have called her before two hours had passed. Why would you wait so long to do something about it?

Did I ask for a critique of my actions? NO. However, did I tell him what I needed him to do as a listener? NO. Now, affter 28 years of marriage, I’ve learned to begin the conversation with what type of listening I need.

Me: I had something really annoying happen to me today and I just need to vent. I don’t want advice, I just want some understanding.

5. Make your nonverbal messages match your verbal ones.

Imagine a supervisor saying, “I uh, really, uh, need you to get to work on time,” in a soft, hesitant voice, while looking down at his shoes. When the nonverbal message says, “Don’t listen to me, I don’t really mean what I’m saying,” people will always believe the nonverbal message. If you want people to not only listen to you, but take you seriously, your nonverbal messages must be congruent with your verbal ones.

6. Listen to others as you would have them listen to you.

If people know that you never listen to them when they talk, they’re unlikely to listen when it’s your turn. However, if you demonstrate that you’re a good, no make that GREAT listener, they’ll usually put forth a better listening effort. If your listening skills need a little work, here are some links to some of my blog posts on the subject:

The #1 Worst Listening Habit (and How You Can Break It)

6 Bad Listening Habits Everyone Should Break

The High Cost of Poor Listening

Break Down Your Listening Barriers in Five Easy Steps