Never bring these things up at the holiday dinner table 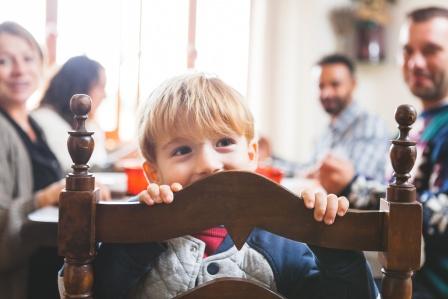 This week, I’m posting my blog early because with Thanksgiving just two days away, we’re officially starting the holiday season- including the stress of family gatherings.

Family holiday gatherings should be a time to reconnect, enjoy great food and drinks, and most of all, to celebrate the “reason for the season.” However, for many families, Thanksgiving dinner and other holiday gatherings somehow don’t turn out to be the idyllic events they hope for because conflict often erupts at the dinner table.

To avoid starting a family feud this holiday season, here are nine conversations you should never start (or allow yourself to get involved in) at a holiday gathering:

1. Any conversation that compares siblings, cousins, or grandchildren, and puts someone in a negative light. These conversations only serve to divide when your goal at the holidays should be to unite!

2. Negative comparisons of the host’s menu choices or anyone’s cooking technique. “Well when I make stuffing, I NEVER put celery in it.” You know what? Not only does no one care, but if your stuffing is so great, you should have offered to make it and bring it.

3. Major “bomb drop” announcements that you know will cause shock or controversy. Save your divorce announcement or the fact that one of your kids failed out of college for after the New Year.

4. Bragging about accomplishments; either yours or your children’s. Save them for the annual Christmas Letter. Okay, I’m kidding, I can’t stand Christmas letters that brag. Just save it.

5. Questioning a family member’s habits. “You’re eating that? I thought you were on a diet?” You’re not the diet police, so don’t worry about what others are eating. Maybe they’ve worked out extra hard to earn those extra calories. Unless someone has ASKED you to tell them to, as my husband always says, “Step away from the buffet,” focus on your own plate.

6. Revealing family secrets, even if they’re your own. What does a little “liquid courage,” plus a long-held secret, plus a captive audience equal? DISASTER. As with #3 above, save it until after the New Year if it’s your secret. If it’s someone else’s, honor your commitment to keeping their information private.

7. Rehashing old arguments, wrongs, or hurts. Holidays are the times for joy and giving thanks, not for grudges and old wounds. Focus on peacekeeping, not war-making.

8. Stepping in to “parent” a child who is not yours. Trust me, either your cousin knows her kid is a brat, or she’s so oblivious that she won’t believe you when you tell her that her kid is a brat. Either way, parent your own kids and be grateful that the brat isn’t yours.

9. Any conversation you’re thinking of starting that requires sarcasm to make your point. There’s no room for sarcasm in the communication tool box of anyone who wants to become part of my “Performance Communicator” team. It serves no purpose other than to give you a moment’s satisfaction and take a piece out of the person you’re dishing it on. If you’ve got something to say, say it sincerely. If the holiday table isn’t the place for it, set up a time and place to have a one-on-one conversation with that friend or relative.