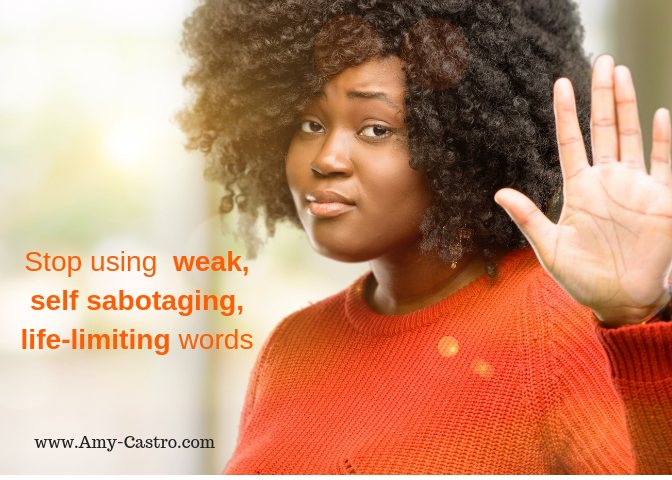 Most people don’t like to make New Year’s Resolutions because they don’t last much past the second week of January. However, this year, I challenge you to make one of your resolutions to eliminate weak, self sabotaging, life-limiting words from your vocabulary.

By eliminating these seven words from your vocabulary, you’ll increase the power of your speech and project a more positive, confident image.

The word just makes everything smaller and often, we use it to make ourselves smaller. “I’m just a consultant,” or “I’m just a stay-at-home mom.” Stop belittling yourself and your accomplishments by putting the word just in front of them. “I’m a consultant,” and “I’m a stay at home mom,” are much better ways to describe who you are and what you do proudly.

The word can’t is a show stopper. As soon as you say you can’t do something, you’ll never really try or even investigate doing something and instead, push it aside.  For example, to say, “I can’t lose weight,” is a ridiculous phrase. If someone wired your jaw shut and chained you to a moving treadmill, you’d lose weight. So in fact, you can lose weight, you’re just CHOOSING not to do what needs to be done to lose weight and you WON’T lose weight until you make different choices.

The word maybe is one of the weakest words in the English language. If you tell yourself maybe you’ll do something, you’ve given yourself permission to procrastinate making a decision. As a result, your maybes are not going to happen. When you tell others maybe, as in “Maybe I’ll drop by your party,” it’s basically as bad as not answering the question at all. When you use the word maybe, you leave everyone in limbo. Stop avoiding making a commitment and focus on saying yes or no.

I’m not saying here that people shouldn’t have hope, but hope is not a strategy for success. Saying, “I hope I get the job,” or “I hope I’ll make my sales numbers,” just sounds like you’re tossing the dice and waiting for the universe or some other force beyond your control to make things happen for you. Stop hoping and start making things happen. Have a goal and create a plan to achieve it. You might not always make it, but you’ll have a much better chance thank just hoping for success.

Saying “I’ll try,” basically dooms you to failure. In fact, when most people say they’ll try, they usually know already that they’re not going to do the thing they’re saying they’ll try to do. If it’s a request from someone else that you don’t want to do, just learn to say no. Otherwise, replace “I’ll try,” with “I will.”

Whether used to guilt yourself into doing something, “I really should exercise more,” or used when you’re procrastinating, “I really should get started on my taxes,” the word “should” causes a negative mindset and actually increases desire not to do the task. Instead of saying “should,” say, “I choose to ___,” and finish the sentence with what you need to do AND why you need to do it. “I choose to get started on my taxes so I’m not stressed like I was last year when I waited until the last minute.”

The word “but” basically discounts everything you stated before you say it. “He’s a really nice guy, but…,” “Yes, I like your tie, but…” “No, your butt doesn’t look big, but…” Sentences like these aren’t going to end well. The other shoe is going to drop and what the speaker really thinks or feels is coming.

Instead of using the word “but” to tie a positive to a negative thought, keep the ideas separate. “Bob is a really nice guy. He’s also a perfectionist, so be sure to double check your work before you submit it to him.”

I’m sticking to these seven for now, to make this resolution more manageable. However, there are many more words and phrases we should all try to eliminate from our speech.

What other words/phrases would you add to this list?