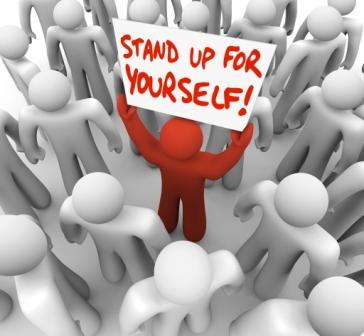 In the 20 plus years I’ve been presenting workshops to both managers and employees, I’ve always advocated Assertiveness as the  way to stand up for yourself in most situations. Although being passive or aggressive might be the best option in some situations, when it comes to dealing with a disrespectful boss or bullying co-worker at work, taking an assertive approach by standing up for yourself while being respectful of the other person is the way to go. Here’s how.

Just because you don’t like the fact that a coworker said your idea wouldn’t work, or that he said it directly or in front of others, doesn’t necessarily make the behavior wrong or inappropriate. We all communicate differently. Some of us are more direct. Some of us are more gentle. Sometimes we just need to adapt a little to another person’s style. Even if it is just style differences though, you still have the right to share how you’d prefer they communicate with you (see #3 below).

Aggressive people tend to “target” and keep acting aggressively toward those who allow themselves to be easy targets. The people who stand their ground, say, “Yes, I’m sure of my answer,” while looking the aggressive person in the eye, and take the time to confront bad behavior (one-on-one), tend not to continue to be treated aggressively. Those who don’t challenge the aggressive person, second guess themselves, and don’t confront the behavior tend to continue to be on the receiving end of aggression.

Getting upset about the WAY feedback is delivered only makes you look defensive and guilty. If someone approaches you in a belittling or inappropriate way with some feedback, the best approach is to say something like,

“Thank you for letting me know about the mistake. I’ll be sure to fix it. In the future though, I’d appreciate it if you ______________(fill in the blank with something like the examples below.)

Too many people let bad behavior go on and on. Just like fighting cancer, the earlier you address the issue, the less time it has to grow and become more malignant. Additionally, it’s difficult to try to sit down with someone and address 3 years’ worth of mistreatment in one conversation. It’s best to “nip it in the bud,” on first offense and before your working relationship starts really being damaged. It also tells the other person that you’re not the type to put up with mistreatment.

Even if I’m the rudest person on the planet, I’m probably not going to take kindly to you telling me to stop being such a rude person. Instead, always confront people with the EXACT behavior you find offensive and don’t label it. For example, you might say, “Carter, I’d appreciate it if you wouldn’t go through the folders on my desk when I’m at lunch. If you need something, just leave me a note and I’ll be sure to get back with you when I get back.”

Going over someone’s head to your boss or HR never goes well and rarely helps make your relationship with the other person better. All he or she is going to feel is betrayed and the trust in your relationship will be destroyed. Unless you’re in fear of your physical safety, it’s always better to go directly to the person with whom you have the problem first. If you think the person might need motivation to cooperate you can always say, “I know this conversation is going to be uncomfortable, but I felt I owed it to you to try to talk to you first before I go to our boss.” Some people I’ve told to do this have said, “Isn’t that a threat?” The answer is no. It’s a promise of resulting action. However, I’d only say this if you truly plan to go above the person’s head as your next step.

This isn’t my preferred method of having a conflict discussion. I like to believe that grown people working in a grown-up workplace can have productive grown-up conversations. However, if the person you’re confronting has proven himself or herself to have twisted the facts, counter-accused you of being aggressive, or has retaliated against you (in the form of giving you the cold shoulder, gossip, sabotaging your work, writing you up, etc.) then you might want to have a witness, preferably one you both agree to, present at the conversation. What you can say is, “I want to be sure our conversation stays on track and that we’re both handling the conversation constructively, so I’d like to have Mark there to help us problem solve and capture our agreements. However, if you’re expecting Mark to actually mediate and not just be a note-taker, be sure he has the skills (or pick someone who does) to do so. Another option is to ask that the conversation be recorded. However, do not record the conversation without the other person’s knowledge unless you have talked with an attorney about the laws in your state for such recording and understand the ramifications.

Finally, if all else fails, put your thoughts in writing and send them to the person. Although written communication can have a lot that gets “lost in translation,” if there’s a fear that the other person will lie about what you said or accuse you of behaving inappropriately, then having a written record of what you gave or emailed to him or her might be your only option left.