Want to be a likeable boss? Adopt these 7 habits 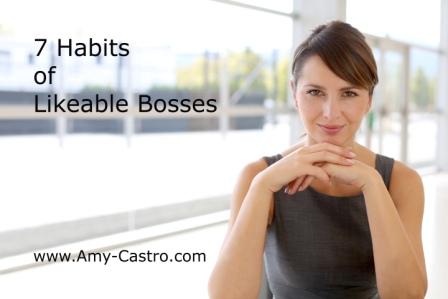 Here are 7 habits of highly likeable bosses to get you started becoming a boss that people love working for:

1. Friendly – Likeable bosses say good morning to everyone, call them by name, smile, and are approachable. They provide positive feedback regularly and address performance issues with compassion and understanding.

2. Positive – Likeable bosses see the glass half full, not half empty. They express optimism for success, rather than focusing on potential failure. Even when they’re addressing performance issues, they focus on expressing confidence in the employee’s ability to do better and focus on the future, not on the past action that’s already over.

3. Reliable – Likeable bosses can be counted on to behave consistently. They’re trustworthy in keeping confidences and in keeping their word. They’re on time, every time, unless there are truly extenuating circumstances. Likeable bosses back up their employees in times of difficulty and give glory freely when things go well.

4. Available – Likeable bosses make time to spend with their employees. They don’t just have an open-door policy and wait for employees to walk through it. They seek employees out on a regular basis, checking progress and morale.

5. Empathetic – Likeable bosses know how to take off their own shoes and step into others’. They focus on understanding first, rather than judging and evaluating. They’re great listeners and take the time to ask questions and dig deep into an issue before making big decisions that impact their employees.

6. Flexible – Likeable bosses follow the rules and uphold policy. However, likeable bosses also know that every issue cannot be adequately accounted for in rules and policies, therefore, they’re open to exceptions when they’re warranted. They don’t nitpick, they do give benefit of the doubt, and they believe in second chances. Likeable bosses’ favorite word is YES and not NO.

7. Imperfect – Likeable bosses aren’t perfect and they make sure their employees know it. They admit their mistakes, admit when they don’t know something, and defer to those who they know are more expert than themselves. They’re confident in their competence and as a result, they’re comfortable sharing their imperfections with others.