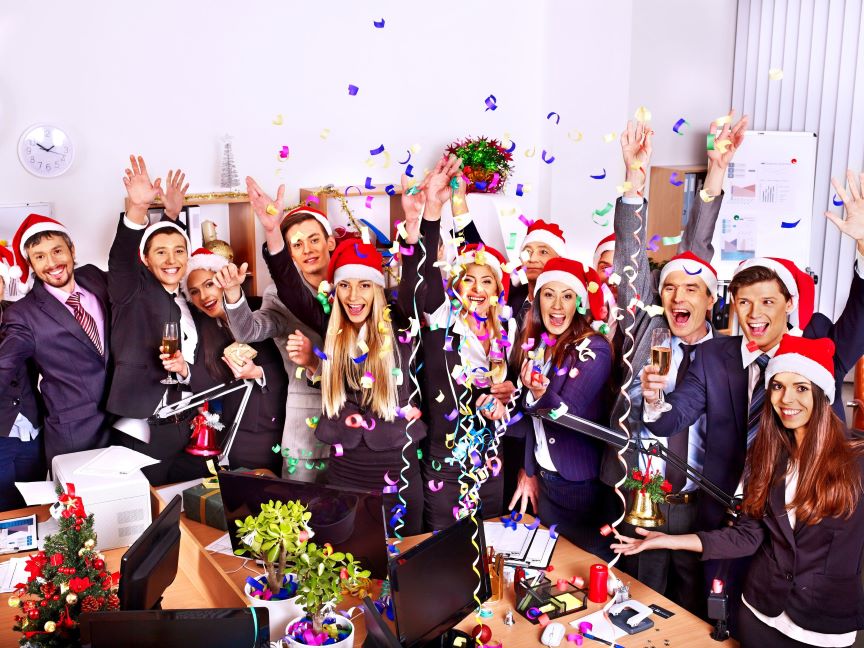 Tis the season for holiday events including those at work and in your professional organizations. The office party can be a great time to really get to know your coworkers and colleagues, a chance to network and make new connections, and overall, an opportunity to shine as bright as Rudolph’s nose.

However, every year we see people who take their image and flush it down the toilet with unprofessional, inappropriate, or thoughtless behavior- either their own, or their significant other’s. If you don’t want to be treated like a Misfit Toy on Monday when everyone is back at the office, follow these tips for having fun, but keeping it professional at holiday events.

Even if you think the event is going to be boring, go anyway. Not attending, even if you have a “good excuse”, may make you look like you’re not part of the team. If the entire affair is miserable, just stay an hour. That’s just long enough to make your presence known and won’t look like you just dropped by to make an appearance.

Remember an office party is still a business function, no matter how your coworkers (or even company leaders) act.

Just because others are overindulging or they’re behaving badly, doesn’t mean bad behavior on your part will go unnoticed. It’s fine to have fun, just don’t make a fool of yourself.

If you drink, be sure to stick to no more than two drinks– regardless of your size, the amount of time between drinks, or how much food you’ve eaten. Drinking more than two drinks could cause you to appear “tipsy,” even if you feel you’re not, and sends a negative message to other attendees. And surprisingly enough, there are people who will be counting!

If you’re unsure how to dress, ask. When in doubt, dress a notch above how you guess others might dress. Additionally, remember, this is a business function, not an opportunity to wear your shortest skirt, lowest-cut blouse, or highest heeled glittery shoes. You also don’t want to show up dressed too casually either. Find something that’s festive, but still stays within the realm of business casual.

With COVID still an issue, people are struggling to find the balance between normalcy and safety. With that in mind, try to maintain social distancing to keep everyone safe. A few tips for party planners- consider a color coded system of name tags that lets others know how each individual wants to be approached. Red might mean “maintain social distance,” yellow might mean “approach if you’re fully vaccinated,” and green might mean, “handshakes and hugs are okay”.  Also, consider outdoor events or events that are held in a space that’s bigger than would normally be needed to allow people to maintain a comfortable distance.

Talk about something other than work.

No one wants to spend time at a party rehashing year-end sales figures or talking about the same old thing they talked about during the day at work. Find other topics and interests you might have in common with colleagues to talk about. Tip for party planners – Create activities that will allow colleagues to find other things to talk about or get to know each other better, such as a holiday themed People Bingo game.

Bring children or other family members unless the invitation specifically says so.

The office party is not an opportunity to feed your family or extended family for free. Therefore, if the invitation doesn’t specifically say to bring the kiddos, cousins, or the mother-in-law, stick to one guest.

Order anything “to go”.

Several years ago we attended an office party for my husband’s then employer. The company was a small one and there were about 20 people total at the event. After drinks, appetizers, and a fine dinner on the owner’s dime, several people had the nerve to order desserts “to go.” It was obvious these employees were trying to get as much free food as possible, and it was very tacky.

Pile your plate at the buffet.

A colleague I know has stopped doing their annual buffet and has gone to a set/served plates because employees were piling their plates with meats and leaving behind all the sides. Since the food was ordered with a certain number of people in mind and a certain serving size of EACH food item, the result was the employees at the end of the line ending up with nothing but side dishes to eat. Since you likely didn’t pay to attend the office holiday party, or even if you did, now is not the time to “get your money’s worth” at the buffet. Create a reasonable, balanced plate and leave some of the good stuff for others.

Take your phone out unless you’re taking pictures.

The office holiday party is a time for you to engage with your coworkers, not to text others, check your twitter feed, or anything else. Don’t be that person standing in the corner just killing time until they can leave. If you need to check in with someone at home, such as a babysitter, step out of the event to do so and make it as quick as possible.

Be the last to leave.

Unless you’re part of the clean-up crew, whomever is organizing the party is likely waiting for you to leave so they can go home. Take the hint when most people take their leave and go home.

Be the first to leave if you’re a leader or someone in charge.

In one of my professional organizations, for two years in a row board leaders, including the president, were the first to leave the event. It left people feeling like the event wasn’t a priority for them. Additionally, some of them were supposed to be part of the clean up efforts, and a handful of people were left to shoulder the load. Not cool!