Just Say No: 5 Ways to Make It Easier When It’s the Last Thing You Want to Do 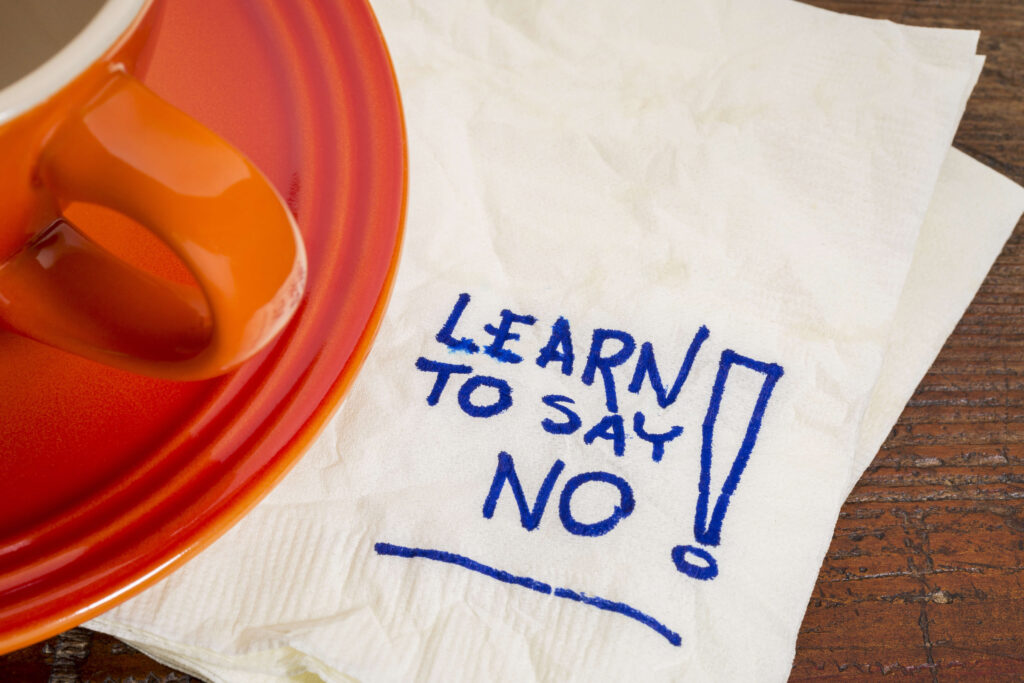 For many of us, it’s the first word we learn, thus the popularity of baby T-shirts that read, “My name is No No” on the front. We learn to use “no” first, because it’s a powerful word synonymous with taking a stand, contradicting authority, being an individual.

It was so easy to say as a child. Why do many of us stop using the word?

–From “Practical Communication: 25 Tips, Tools, and Techniques for Getting Along and Getting Things Done” 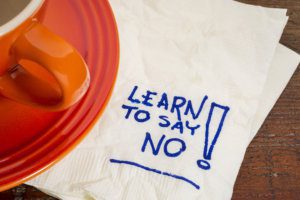 Not that it’s a new concept, but I’ve heard a lot of people over the last few weeks talk about the need to “set boundaries” with others in their lives. Although the process can be complicated, one of the first steps to setting boundaries with others is to learn how to say, “No.”

However, every time I recommend this to someone, or bring it up in a workshop. I hear,

To which I reply, “Why? It’s two simple letters, one syllable!”

Here are some common responses:

– It would kill my mom if I said that to her

Most of these reasons people give are not really valid. Depending on how, to whom, and how often you say “no,” you may face these consequences, but when done right and for the right reasons, saying “no” to someone is unlikely to cause such negative outcomes.

What you might face is disbelief, surprise, and possibly hurt feelings on the part of the person to whom you say “no.” If that’s the case, if you’ve said “no” for a good reason, and you’re doing the right thing for yourself and for the other person, I say, let them live with it. They’ll get over it.

1. Think carefully about whether you really want to say “no,” and how willing you are to stick with it. If you’re ambivalent about the request, or are just looking for someone to beg you to do it, or you’re holding out for something better (like a higher pay raise) then you’ve really made your choice—you’re saying yes—just making the requester work for it. If you truly want to say “no,” move on to tip 2.

2. Weigh the costs and benefits of saying “no.” What are the costs to you? Will you get fired? Will you lose a friendship? Also, ask yourself what the costs are to the other person. If you care about him or her, you may choose to do something you personally don’t want to do for the greater good of the other person or your relationship. However, weigh carefully and be realistic about the costs. Will you REALLY be fired? Will that friend REALLY disown you, or just be mad at you for a day?

3. Say “no” confidently. Look the person in the eye and say with a firm, but polite tone, “No, I can’t.”  If you want to be apologetic, then say, “I’m sorry, I  can’t” and leave it at that. This is the key to avoid being talked into doing something. If you offer rationale or explanations, people will find ways around them.

4. Offer an alternative. Sometimes we say “no” because the request doesn’t work with our schedule, values, or lifestyle, but we really do want to help. For example, we might not be able to take a day off from work to help at a child’s school party, but we’re willing to help in another way, like baking cookies or sending supplies. We can say, “I’m sorry I can’t attend the party, but I’d be glad to _____ instead.”

5. Use the phrase, “I have another commitment.” The word “commitment” sounds official and most people don’t question it. Your commitment is simply anything you’ve already determined you need or want to do instead of the request. In 20 years, I’ve never had someone reply, “What is it?” They just accept it and move on.

What creative ways (without telling a lie) have you found for saying “no?”

Post Views: 664
amy castro's blog amy-castro how to say no no performance communication blog say no